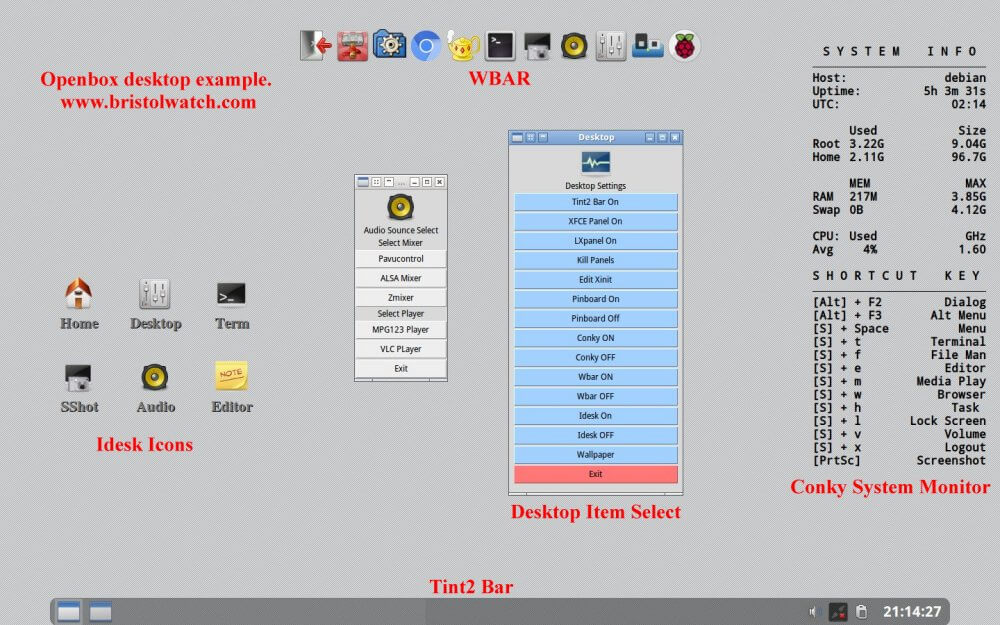 This will pertain to the Raspberry Pi 3 and 4 are much more powerful. Recent versions of Raspbian already have many early issues fixed. It is still Debian based and one must boot in with the command line.

What is Openbox? It is NOT a desktop, but a window manager. It is used by the native LXDE Desktop. We can reuse parts of the LXDE desktop.

This page assumes one has some knowledge of Linux. We will be using the terminal command line get used to it.

Because I'm using the ARM version of Debian Linux the programs work the same way with a normal PC Openbox system.

I have also included a reference PDF for basic Linux commands you will need. See Linux Command Line Cheat Sheet.

There are two ways to go here - create Openbox from scratch or modify the existing LXDE Desktop as shown in Fig, 2. I'll start with scratch.

One must log in with the command line typing "startx".

The system searches home folder "Pi" (or whomever you log in as) for a file .xnintrc. See my webpage Tutorial Xinitrc Desktop Manager Control for Linux.

If not there it boots to the default LXDE.

This file doesn't come with the system the user has to create it. Open lxterminal (comes with LXDE) and type "pwd" to make sure you are in your home directory.

Next type "touch .xinitrc" and you have created a blank file. You can also create the file from the file manager.

Any file or directory that begins with a period is a hidden file. Your home directory can be filled with these hidden files. These are mostly configuration files for the system and installed programs.

Type "ls" and you will not see the file. Now type "ls -a" and you should see the blank file you created along with others. See Fig. 2 above for an example.

The .xinitrc tell the system what programs to open such as a wallpaper setter, pinboard, taskbar, backgrounds, etc. Now we have to decide what desktop features we want. I go for speed and utility. New let's install Openbox. From the terminal:

If one has a regular Debian distribution on a PC with a display manager such as lightdm and have installed Openbox select Openbox from the menu then log in.


Let's assume the user is pi. Open this folder and add the following as root:


You should see something like this - add what isn't there:


Save and close leafpad. This gives user pi sudo access without having to type in a password with sudo every time. Type reboot (enter) to reboot RPi, log back in. Open a terminal, then type "sudo su" and you should be logged in as root if everything worked.

Date April 26, 2019. Due to changes in the newest Raspbian I've deleted this section. Do not tamper with FSTAB or it will wreck your system.

This is called the Openbox desktop and from here we will construct our own fast operating system. What do we really need? Right click the mouse and a small selection box comes up with a terminal program and web browser (Midori) and little else.

At this point we are going to add these items to the menu in order to learn how to setup the menu and get direct access to those programs. Let's add those items already installed to the menu first and add more later.

Open the terminal and I'm assuming you logged in as root. Type obmenu (enter) and we can now open Obmenu as shown above. The top bar should say "Obmenu /root/.config/openbox/menu.xml". Click on "Openbox 3" to open the main menu.

Put the dark bar below the terminal and web browser and select "New Item" and put in:

Label - PcmanFM ; Execute - pcmanfm and once again select "New Item" and do the same for the following:

Now save and right click on the menu "restart" and the now items you entered are in the menu. You should also see "Debian" if menu was installed and opens up to a number of other small programs.

Pcmanfm is a file manager that came with LXDE and leafpad is a text editor. As one adds new programs they can return here to add those to the menu.

If one is in their home directory (which is where you should be if not root) the top black bar will have "~/.config/openbox/menu.xml".

This can also be done from a text editor in order to add small icons:


And this is a sample where "label" and "execute is what you entered with Obmenu. (This example uses thunar.)

Here is great screen shot of my Openbox menu: sshot3.png and that pre-made menu can be downloaded via wget and will need some editing unless one is following this entire series.


What one did above was rename the old menu.xml, downloaded the replacement, then copied it to ~/.config/openbox.

How to Configure Openbox

This assumes the following programs have been installed if not do so now.

When Openbox loads it will run the file "autostart" in the "~/.config/openbox" folder if not over ridden by .xinitrc. Open a terminal and:

Copy what's below and uncomment what you want and save.

This will work if one doesn't have a .xinitrc file over riding it. To find out more see Raspberry Pi Window Manager Control with Xinitrc