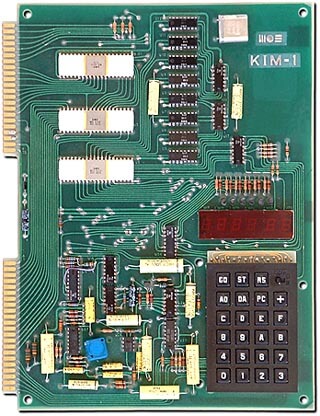 The KIM-1, short for Keyboard Input Monitor, was a small 6502-based microcomputer kit developed and produced by MOS Technology, Inc. and launched in 1975. The KIM-1 consisted of a single printed circuit board with all the components on one side. It included three main ICs; the MCS6502 CPU, and two MCS6530 Peripheral Interface/Memory Devices.

Also included were six 7-segment LEDs (like on a calculator) and a 24-key calculator-type keypad. It was programmed in Hexadecimal. Many of the pins of the I/O portions of the 6530s were connected to the 44-pin connector on the edge of the board (lower left), where they could be used as a serial system for driving a TTY 33-ASR (teletype terminal and paper tape reader/punch).

One of these connectors also doubled as the power supply connector, and included analog lines that could be attached to a cassette tape recorder. (Required 12 volts to operate the LM311.)

The KIM-1 was one of the first single-board computers, needing only an external power supply to enable its use as a stand-alone experimental computer. This fact, plus the relatively low cost of getting started, made it quite popular with hobbyists through the late 1970s. Mine cost $225 in 1979. My keypad wore out and there's no replacement available.

To quote another source:

The KIM-1 was created in 1975 by Chuck Peddle as a development board for the new MOS 6502 microprocessor. The targeted users were engineers, but it turned out that hobbyist users were buying the KIM-1, not engineers. What made the KIM-1 so appealing to average hobbyists? At first glance, it has only 6 digit display, a mere 23 button keypad, and only 1K of RAM. By today's standards, most MP3 players are 100 times more powerful.

But back in 1976, it was a feature packed board for on $245. It also included a TTY interface to attach a terminal or paper tape. A cassette interface was also included when connectors were attached to the expansion connector giving mass storage to this powerful board.

The other feature the KIM-1 had was expansion connectors to connect real world devices such as switches, lights and speakers. With all of these features built into a board selling for half the price of most computer systems, it quickly became a very popular computer.

End quote. This by the way was not a toy. What was really great was it took talent and hard work to learn how do things with limited technical resources. Entire books and numerous programs were written around the KIM-1 and many of us in electronics got our hands on our first real computer. See my latest computer projects:

The designer of the TV Typewriter, Don Lancaster, developed a low cost video display for the KIM-1. The add-on board would display up to 4000 characters on a TV or monitor.

A typical configuration would be 16 lines of 32 upper case only characters. The board had only 10 low cost ICs and used the KIM's memory for the screen storage. The TVT-6 project appeared on the cover on Popular Electronics in July 1977.

The complete kit could be ordered from PAIA Electronics for $34.95. Don expanded this design to do color and simple graphics in The Cheap Video Cookbook. I built this and added to the KIM which required a lot of modifications. 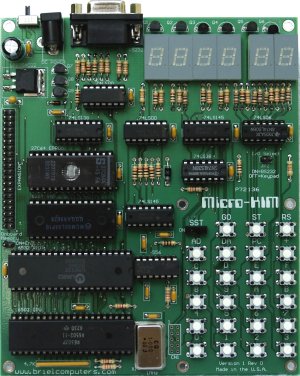 Introducing the micro-KIM. The micro-KIM is a clone of the KIM-1 created by MOS technologies in 1975 as a development board for the 6502 CPU. The micro-KIM uses many of the same components as the KIM-1 to give it that authentic vintage feel.

The 6530 RRIOT included a custom programmed ROM and has been replaced by a 6532 RIOT and an external ROM. The custom 23 key keypad is onboard with tactile switches giving the micro-KIM a compact size. a total of 5K RAM is onboard with an expansion header for future expansion of memory or add-on boards.

With a projected selling price of $99 the micro-KIM is one of the most affordable 8 bit computer kits available today. As a matter of fact, the micro-KIM was designed around the student market in an effort to offer students and schools a low-cost 8 bit CPU trainer. 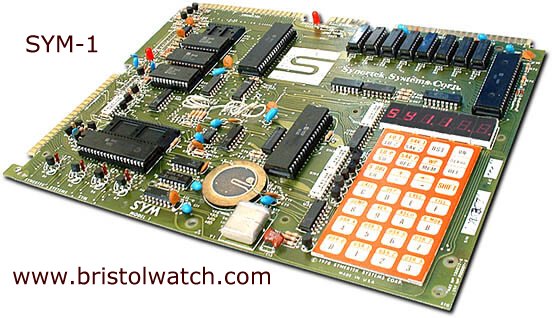 The SYM-1 was a competitor to the popular MOS Technology KIM-1 system, with which it was compatible to a large extent. Compared to the KIM-1, enhancements included the ability to run on a single +5 volt power supply, an enhanced monitor ROM, three configurable ROM/EPROM sockets, RAM expandable on-board to 4 kibibytes, an RS-232 serial port, and a "high speed" (185 bytes/second, the KIM-1 supported about 8 bytes/second) audio cassette storage interface. It also featured on-board buffer circuits to ease interfacing to "high voltage or high current" devices.