A constant current source (CCS) in electronics is a device/circuit that produces a constant value of current regardless of source voltage or load resistance. Fig. 1 illustrates a common CCS circuit using a PNP bipolar transistor. The values of the Ic = Ib * hfe (Beta) of the transistor. A constant current circuit can also be used as a current limiter.

Maxim Semiconductor notes the following on why we need to use a constant current source:

When applying white LEDs for display back lighting or other illumination applications, there are two reasons to drive them with constant current: To avoid violating the Absolute Maximum Current Rating and compromising the reliability.

To obtain predictable and matched luminous intensity and chromaticity from each LED...The forward current vs. forward voltage of six random white LEDs (three from each of two manufacturers) ... driving these six LEDs with 3.4V, for instance, will cause their forward current to vary from 10mA to 44mA, depending upon the LED."

Besides LEDs constant current sources are used with resistive sensors such as photocells and thermistors for greater stability and for current limited power supplies. Also useful for testing and prototyping.

These circuits are a must for operating high-power light emitting diode (LED) arrays. The circuit above is simple, can be a little unstable due to temperature drifts with Q1 causing current drift. That problem is minor compared to power supply drift can cause far greater instability.

Other constant current sources use the LM317 a popular variable voltage regulator.

The TL431A is another popular part in a small TO-92 package. In simple terms the TL431A acts a temperature compensated variable/adjustable https://www.bristolwatch/ele/zener_power_supply.htmZener diode. It can also act as a voltage reference or constant current source.

This is far superior to the two earlier circuits because power supply swings produced little measurable change in Ic. But the LM334 suffers from a maximum drive current of only 10mA and there are many applications where far higher currents are need.

In our next section we explore using the LM317 variable voltage regulator in its constant current source mode. 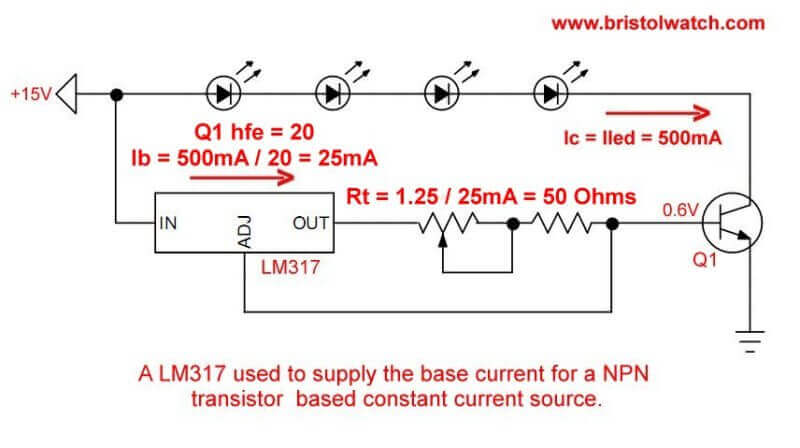 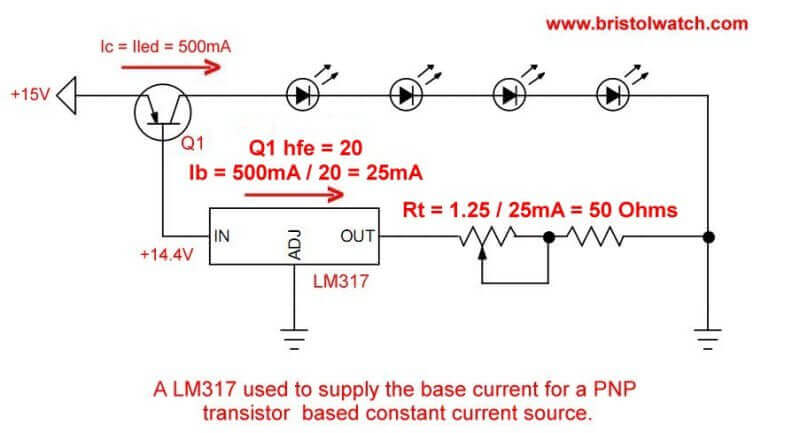 Above we boost the current out of a LM317. See LM317 Adjustable Voltage current Boost Power Supply