These devices are functionally identical. The LM311 Voltage Comparator can be used for these applications as well and also has a number of unique features.

Here I'll concentrate on examples not presented on my Comparator Circuits Examples Tutorial. I'd like to thank Rob Paisley for his hard work and inspiration.

Fig. 1 shows the internal equivalent circuit of a single comparator in the LM339 quad comparator. (See internal package connections for LM339.) It consists of an operational amplifier with an open collector output transistor. 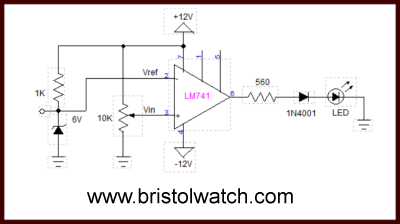 Fig. 2 shows the use of a LM741 op-amp comparator circuit. This requires a bipolar power supply and creates a number of problems. We can use a LM358 single supply op-amp. Fortunately the LM339, LM393, and LM311 are all single supply comparators with open collector outputs.

They all work the same: when the voltage on the Reference input is greater than the voltage input the output is switched ON or OFF.

The LM311 differ from the LM339 and LM393 in the output transistor emitter has to be connected to ground externally.

In the case of the LM358 or LM741 it outputs a voltage while the open collector turns on creating a path to ground - an electronic ON-OFF switch.

To repeat once more on the rule for comparator inputs with open collector outputs:

Hysteresis is defined as:

For slow time changing input signal, an output oscillation can appear while the input signal remains close to the reference voltage. Also low amplitude signal on high impedance can cause oscillations due to noise background.

Such unwelcome behavior can be solved by hysteresis. The principle of hysteresis consists of two different input threshold voltages depending on actual output state.

In Fig. 7 we have a comparator based Schmitt trigger which are used to assure clean switching with noisy or erratic signals. When the input voltage on TP2 is less than TP1 the comparator is in the OFF condition. TP3 is pulled up to nearly 12-volts by R4 a 3K resistor.

Fig. 8 illustrates how when the comparator is OFF as R4 and R1 form a series 30K which is in parallel with R2 shifting TP1 (Vref) to 6.56-volts.

Without R1 Vref would be 6-volts.

When the comparator is ON TP3 is switched to ground through the internal open collector transistor where 47K resistor R1 is now in parallel with 10K resistor R3 forming a total resistance of 8245 ohms. This drops Vref on TP1 to 5.36-volts.

It takes 6.56-volts on Vin to turn ON the comparator but the voltage will have to drop to 5.36-volts to turn off. This produces a switching gap or hysteresis value of ~1.2-volts helping to assure stable operation.

A Hall sensor in its most basic form is an analog integrated circuit. It consists of a Hall plate that outputs a "transverse" voltage based on the intensity of a magnetic field - polarity is dependant on magnetic polarity.

It also consists of a high gain differential amplifier because the generated voltage is small. The output voltage is analog usually centered around half the power supply voltage.

The addition of a Schmitt trigger with a properly set hysteresis will create a Hall switch or Hall latch. They often have an open collector output transistor.

The Schmitt triggers used here are based on an analog comparator. These can be built from operational amplifiers (op-amps) like the LM358 or LM741.

Often considered "digital" at this point we have in reality a one-bit analog-to-digital converter.