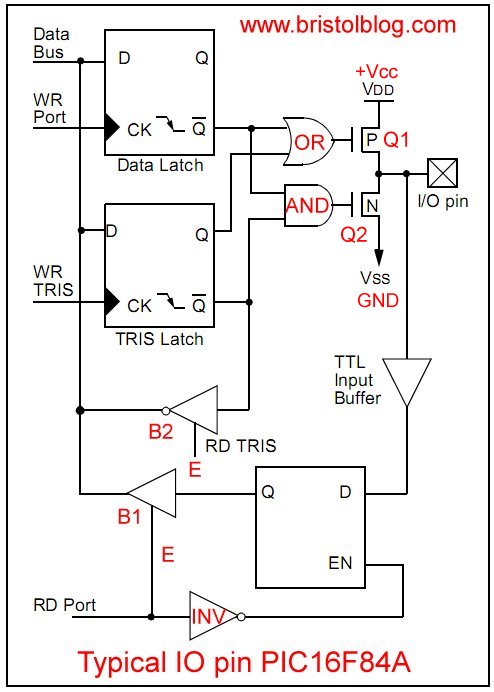 Other than voltage-current levels a CMOS OR, NOR, AND, NAND, XOR gates operate identically to their TTL cousins. Note: CMOS and TTL can't be directly connected to each other unless the same voltage without some form of level translation circuits. I'll be addressing that issue in other pages..

The above circuit in Fig. 2 is built from NAND or NOR gates. It's also called a one-bit data latch. While the internal construction differs the function is identical: store one bit of data when the voltage on the CLK pin changes.

If the Q output is HIGH then the !Q output is LOW and vice-versa. It will remember the last condition until changed or power is removed.

These flip-flop type circuits are the basis of all modern computers and micro-controllers. Modern micro-controllers have internal memory often flash for program storage, EEPROM, and static scratchpad RAM. Some require an external oscillator crystal.

All have programmable Input-Output pins. Fig. 1 illustrates a single I/O pin on a Microchip PIC16F84A. By writing binary data to specific static memory locations we setup hardware modules and configuration of the I/O pins.

Microchip PIC which stands for Peripheral Interface Controller have many variations from basic to super powerful. Can also be programmed in C or assembly through software known as MPLAB from Microchip.

Negatives: must be compiled and uploaded through a separate PIC programmer. The C in MPLAB is copyrighted (I think). I never use C on basic low end devices. I use assembly for that.

Assembly requires a lot of knowledge of the particular controller along with electronics. Not for beginners.

It uses three D-flip-flops similar to those constructed from NAND and NOR gates. Q1 and Q2 are MOSFETs or metal-oxide field effect transistors. They are voltage operated and in this case can "source" or "sink" 25 milliamps (mA) or 0.025 amps.

The configuration is known as Tri-State. The I/O pin can be HIGH, LOW, or floating (Hi-Z).

While this is connected in a Tri-State configuration the following webpage introduces this circuit as a non-tri-state power driver or buffer circuit in Fig. 3. It also illustrates the concept of sink-source connections.

Know the concepts of sink and source!

As a quick note I'll assume a 5-volt circuit. A HIGH or binary 1 is 5-volts, a LOW or binary 0 is 0-volts. Current flow is assumed to be from positive to negative.

Also see the following on MOSFET transistor switches. Yes there are two basic types that differ by direction of current flow.